The paired kidneys are located between the twelfth thoracic and third lumbar vertebrae, one on each side of the vertebral column. The right kidney usually is slightly lower than the left because the liver displaces it downward. The kidneys, protected by the lower ribs, lie in shallow depressions against the posterior abdominal wall and behind the parietal peritoneum. This means they are retroperitoneal. Each kidney is held in place by connective tissue, called renal fascia, and is surrounded by a thick layer of adipose tissue, called perirenal fat, which helps to protect it. A tough, fibrous, connective tissue renal capsule closely envelopes each kidney and provides support for the soft tissue that is inside.

In the adult, each kidney is approximately 3 cm thick, 6 cm wide, and 12 cm long. It is roughly bean-shaped with an indentation, called the hilum, on the medial side. The hilum leads to a large cavity, called the renal sinus, within the kidney. The ureter and renal vein leave the kidney, and the renal artery enters the kidney at the hilum. 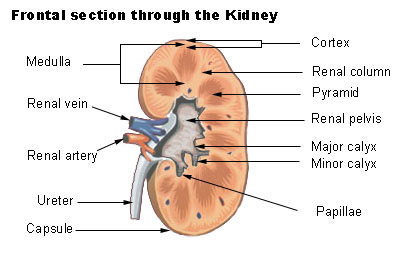 The outer, reddish region, next to the capsule, is the renal cortex. This surrounds a darker reddish-brown region called the renal medulla. The renal medulla consists of a series of renal pyramids, which appear striated because they contain straight tubular structures and blood vessels. The wide bases of the pyramids are adjacent to the cortex and the pointed ends, called renal papillae, are directed toward the center of the kidney. Portions of the renal cortex extend into the spaces between adjacent pyramids to form renal columns. The cortex and medulla make up the parenchyma, or functional tissue, of the kidney.

The juxtaglomerular apparatus, which monitors blood pressure and secretes renin, is formed from modified cells in the afferent arteriole and the ascending limb of the nephron loop.