Directional terms describe the positions of structures relative to other structures or locations in the body.

Superior or cranial - toward the head end of the body; upper (example, the hand is part of the superior extremity).

Inferior or caudal - away from the head; lower (example, the foot is part of the inferior extremity).

Anterior or ventral - front (example, the kneecap is located on the anterior side of the leg).

Posterior or dorsal - back (example, the shoulder blades are located on the posterior side of the body).

Medial - toward the midline of the body (example, the middle toe is located at the medial side of the foot).

Lateral - away from the midline of the body (example, the little toe is located at the lateral side of the foot).

Proximal - toward or nearest the trunk or the point of origin of a part (example, the proximal end of the femur joins with the pelvic bone).

Distal - away from or farthest from the trunk or the point or origin of a part (example, the hand is located at the distal end of the forearm). 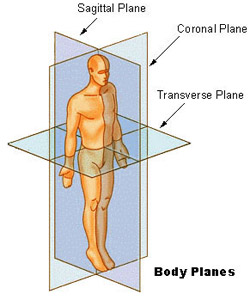 Planes of the Body

Coronal Plane (Frontal Plane) - A vertical plane running from side to side; divides the body or any of its parts into anterior and posterior portions.

Sagittal Plane (Lateral Plane) - A vertical plane running from front to back; divides the body or any of its parts into right and left sides.

Axial Plane (Transverse Plane) - A horizontal plane; divides the body or any of its parts into upper and lower parts.

Median plane - Sagittal plane through the midline of the body; divides the body or any of its parts into right and left halves.

The cavities, or spaces, of the body contain the internal organs, or viscera. The two main cavities are called the ventral and dorsal cavities. The ventral is the larger cavity and is subdivided into two parts (thoracic and abdominopelvic cavities) by the diaphragm, a dome-shaped respiratory muscle. 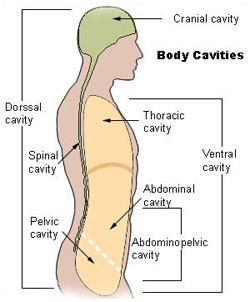 The upper ventral, thoracic, or chest cavity contains the heart, lungs, trachea, esophagus, large blood vessels, and nerves. The thoracic cavity is bound laterally by the ribs (covered by costal pleura) and the diaphragm caudally (covered by diaphragmatic pleura).