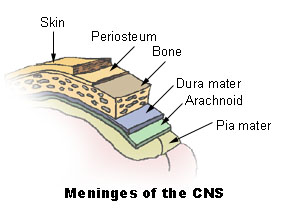 There are three layers of meninges around the brain and spinal cord. The outer layer, the dura mater, is tough white fibrous connective tissue. The middle layer of meninges is arachnoid, which resembles a cobweb in appearance, is a thin layer with numerous threadlike strands that attach it to the innermost layer. The space under the arachnoid, the subarachnoid space, is filled with cerebrospinal fluid and contains blood vessels. The pia mater is the innermost layer of meninges. This thin, delicate membrane is tightly bound to the surface of the brain and spinal cord and cannot be dissected away without damaging the surface.

Meningiomas are tumors of the nerve tissue covering the brain and spinal cord. Although meningiomas are usually not likely to spread, physicians often treat them as though they were malignant to treat symptoms that may develop when a tumor applies pressure to the brain.

The brain is divided into the cerebrum, diencephalons, brain stem, and cerebellum.

The largest and most obvious portion of the brain is the cerebrum, which is divided by a deep longitudinal fissure into two cerebral hemispheres. The two hemispheres are two separate entities but are connected by an arching band of white fibers, called the corpus callosum that provides a communication pathway between the two halves.

Each cerebral hemisphere is divided into five lobes, four of which have the same name as the bone over them: the fontal lobe, the parietal lobe, the occipital lobe, and the temporal lobe. A fifth lobe, the insula or Island of Reil, lies deep within the lateral sulcus.

The diencephalons is centrally located and is nearly surrounded by the cerebral hemispheres. It includes the thalamus, hypothalamus, and epithalamus. The thalamus, about 80 percent of the diencephalons, consists of two oval masses of gray matter that serve as relay stations for sensory impulses, except for the sense of smell, going to the cerebral cortex. The hypothalamus is a small region below the thalamus, which plays a key role in maintaining homeostasis because it regulates many visceral activities. The epithalamus is the most dorsal portion of the diencephalons. This small gland is involved with the onset of puberty and rhythmic cycles in the body. It is like a biological clock.

The brain stem is the region between the diencephalons and the spinal cord. It consists of three parts: midbrain, pons, and medulla oblongata. The midbrain is the most superior portion of the brain stem. The pons is the bulging middle portion of the brain stem. This region primarily consists of nerve fibers that form conduction tracts between the higher brain centers and spinal cord. The medulla oblongata, or simply medulla, extends inferiorly from the pons. It is continuous with the spinal cord at the foramen magnum. All the ascending (sensory) and descending (motor) nerve fibers connecting the brain and spinal cord pass through the medulla.

The cerebellum, the second largest portion of the brain, is located below the occipital lobes of the cerebrum. Three paired bundles of myelinated nerve fibers, called cerebellar peduncles, form communication pathways between the cerebellum and other parts of the central nervous system.

A series of interconnected, fluid-filled cavities are found within the brain. These cavities are the ventricles of the brain, and the fluid is cerebrospinal fluid (CSF).

The spinal cord is divided into 31 segments with each segment giving rise to a pair of spinal nerves. At the distal end of the cord, many spinal nerves extend beyond the conus medullaris to form a collection that resembles a horse's tail. This is the cauda equina. In cross section, the spinal cord appears oval in shape.

Glioma refers to tumors that arise from the support cells of the brain. These cells are called glial cells. These tumors include the astrocytomas, ependymomas and oligodendrogliomas. These tumors are the most common primary brain tumors.