The stomach, which receives food from the esophagus, is located in the upper left quadrant of the abdomen. The stomach is divided into the fundic, cardiac, body, and pyloric regions. The lesser and greater curvatures are on the right and left sides, respectively, of the stomach. 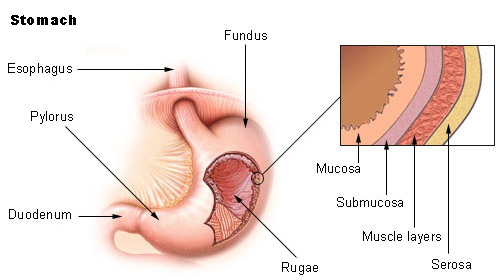 The mucosal lining of the stomach is simple columnar epithelium with numerous tubular gastric glands. The gastric glands open to the surface of the mucosa through tiny holes called gastric pits. Four different types of cells make up the gastric glands: