The primary female reproductive organs, or gonads, are the two ovaries. Each ovary is a solid, ovoid structure about the size and shape of an almond, about 3.5 cm in length, 2 cm wide, and 1 cm thick. The ovaries are located in shallow depressions, called ovarian fossae, one on each side of the uterus, in the lateral walls of the pelvic cavity. They are held loosely in place by peritoneal ligaments.

The ovaries are covered on the outside by a layer of simple cuboidal epithelium called germinal (ovarian) epithelium. This is actually the visceral peritoneum that envelops the ovaries. Underneath this layer is a dense connective tissue capsule, the tunica albuginea. The substance of the ovaries is distinctly divided into an outer cortex and an inner medulla. The cortex appears more dense and granular due to the presence of numerous ovarian follicles in various stages of development. Each of the follicles contains an oocyte, a female germ cell. The medulla is a loose connective tissue with abundant blood vessels, lymphatic vessels, and nerve fibers.

Female sex cells, or gametes, develop in the ovaries by a form of meiosis called oogenesis. The sequence of events in oogenesis is similar to the sequence in spermatogenesis, but the timing and final result are different. Early in fetal development, primitive germ cells in the ovaries differentiate into oogonia. These divide rapidly to form thousands of cells, still called oogonia, which have a full complement of 46 (23 pairs) chromosomes. Oogonia then enter a growth phase, enlarge, and become primary oocytes. The diploid (46 chromosomes) primary oocytes replicate their DNA and begin the first meiotic division, but the process stops in prophase and the cells remain in this suspended state until puberty. Many of the primary oocytes degenerate before birth, but even with this decline, the two ovaries together contain approximately 700,000 oocytes at birth. This is the lifetime supply, and no more will develop. This is quite different than the male in which spermatogonia and primary spermatocytes continue to be produced throughout the reproductive lifetime. By puberty the number of primary oocytes has further declined to about 400,000.

Beginning at puberty, under the influence of follicle-stimulating hormone, several primary oocytes start to grow again each month. One of the primary oocytes seems to outgrow the others and it resumes meiosis I. The other cells degenerate. The large cell undergoes an unequal division so that nearly all the cytoplasm, organelles, and half the chromosomes go to one cell, which becomes a secondary oocyte. The remaining half of the chromosomes go to a smaller cell called the first polar body. The secondary oocyte begins the second meiotic division, but the process stops in metaphase. At this point ovulation occurs. If fertilization occurs, meiosis II continues. Again this is an unequal division with all of the cytoplasm going to the ovum, which has 23 single-stranded chromosome. The smaller cell from this division is a second polar body. The first polar body also usually divides in meiosis I to produce two even smaller polar bodies. If fertilization does not occur, the second meiotic division is never completed and the secondary oocyte degenerates. Here again there are obvious differences between the male and female. In spermatogenesis, four functional sperm develop from each primary spermatocyte. In oogenesis, only one functional fertilizable cell develops from a primary oocyte. The other three cells are polar bodies and they degenerate.

An ovarian follicle consists of a developing oocyte surrounded by one or more layers of cells called follicular cells. At the same time that the oocyte is progressing through meiosis, corresponding changes are taking place in the follicular cells. Primordial follicles, which consist of a primary oocyte surrounded by a single layer of flattened cells, develop in the fetus and are the stage that is present in the ovaries at birth and throughout childhood. 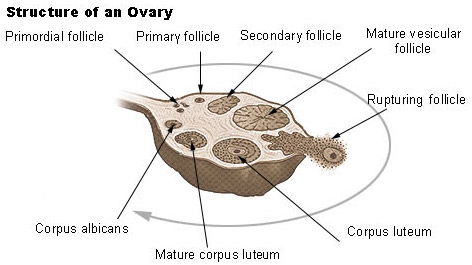 Beginning at puberty, follicle-stimulating hormone stimulates changes in the primordial follicles. The follicular cells become cuboidal, the primary oocyte enlarges, and it is now a primary follicle. The follicles continue to grow under the influence of follicle-stimulating hormone, and the follicular cells proliferate to form several layers of granulose cells around the primary oocyte. Most of these primary follicles degenerate along with the primary oocytes within them, but usually one continues to develop each month. The granulosa cells start secreting estrogen and a cavity, or antrum, forms within the follicle. When the antrum starts to develop, the follicle becomes a secondary follicle. The granulose cells also secrete a glycoprotein substance that forms a clear membrane, the zona pellucida, around the oocyte. After about 10 days of growth the follicle is a mature vesicular (graafian) follicle, which forms a "blister" on the surface of the ovary and contains a secondary oocyte ready for ovulation.