The pharynx, commonly called the throat, is a passageway that extends from the base of the skull to the level of the sixth cervical vertebra. It serves both the respiratory and digestive systems by receiving air from the nasal cavity and air, food, and water from the oral cavity. Inferiorly, it opens into the larynx and esophagus. The pharynx is divided into three regions according to location: the nasopharynx, the oropharynx, and the laryngopharynx (hypopharynx). 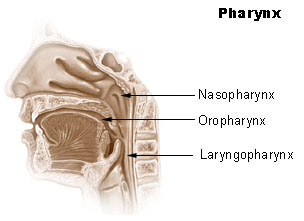 The upper part of the pharynx (throat) lets only air pass through. Lower parts permit air, foods, and fluids to pass.

The pharyngeal, palatine, and lingual tonsils are located in the pharynx. They are also called Waldereyer's Ring.

The retromolar trigone is the small area behind the wisdom teeth.