Lymph nodes are small bean-shaped structures that are usually less than 2.5 cm in length. They are widely distributed throughout the body along the lymphatic pathways where they filter the lymph before it is returned to the blood. Lymph nodes are not present in the central nervous system. There are three superficial regions on each side of the body where lymph nodes tend to cluster. These areas are the inguinal nodes in the groin, the axillary nodes in the armpit, and the cervical nodes in the neck.

The typical lymph node is surrounded by a connective tissue capsule and divided into compartments called lymph nodules. The lymph nodules are dense masses of lymphocytes and macrophages and are separated by spaces called lymph sinuses. The afferent lymphatics enter the node at different parts of its periphery, which carry lymph into the node; entering the node on the convex side. The lymph moves through the lymph sinuses and enters an efferent lymphatic vessel, which, located at an indented region called the hilum, carries the lymph away from the node. 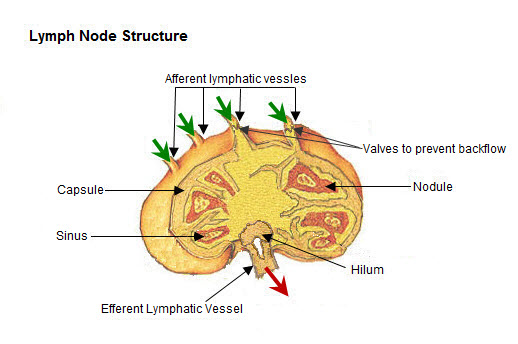